Richard welcomed us to the first proper meeting since January 2020. We were particularly pleased that Bill and Eileen Evans, as well as the Mayor, Cllr James Bacon, and Cllr Nigel Sinden could be with us. Richard also welcomed our friends Yvette, Alfred and Tunde, who came down to represent the Hastings Sierra Leone (UK) Association.

James made a presentation to Bill, on behalf of both the Link and the Borough Council,  to mark his retirement as our Membership Secretary after 18 years: an International Friendship Medal, a splendid Sierra Leonean shirt and a plaque carved by young men from Hastings SL. With his usual modesty and good humour, Bill looked back over his years of working and fundraising for the Link. 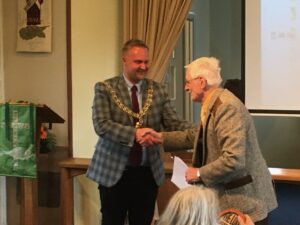 Lockdown has made fundraising difficult. Fortunately, generous donations from Kiley’s Karpets, St Helen’s Church and COGS, among others, have enabled us to give the go-ahead to Phase 2 of the Triage & Isolation units, and to supply modest funds for the School Farms project. The Hastings Sierra Leone Association (UK) has been working with the local association on the Twin Towns Centre.

Zoom has been a blessing: the Trustees have been able to meet regularly and make decisions. We have produced newsletters to keep Friends of the Link aware of all that was happening in Hastings SL. Richard thanked the Trustees for  their efforts and expertise over the months.

Cllr James Bacon offered to invite the IPC students to visit him at the Town Hall. Roger reported that we have no secondary school in the scheme since the Brighton Academy withdrew its schools without notice. He is trying to interest the Ark group, so far with no response, though this may not have been the best timing.

Christine reported that children attending A&E speak enthusiastically of their schools’ involvement. It is clear that ours is a genuinely two-way exchange of ideas and experiences.

At this point, Yvette spoke about improvements being made at the Twin Towns Centre. Two churches are using part of the building for meetings.  Some under-used rooms are being re-vamped and put to a new purpose. The water-tower is to be moved, and its present site will be converted to a children’s play area.VIDEO-2021-10-23-12-49-18-1

Some of the grounds within the TTC’s walls are being used temporarily to grow crops. VIDEO-2021-10-23-12-49-31-1  A fire-escape is to be built to give safe exit from the first-floor accommodation. This is being funded from money raised by the UK Association’s Jamboree: over £5,000. The Hastings SL group is being asked to contribute. They are currently deciding on a contractor and expect work to start in 2 weeks. Yvette thanked  the Link for its continued support.

Isabel expressed huge satisfaction at the success of the project. It has been amazing how much the schools are achieving on a quite modest financial input from us. There is great enthusiasm, abundant crops are being produced and the harvest is put to good use. The whole scheme has been put on a sound footing, with the schools signing up to its objectives: sustainability, building agricultural skills and involving the local community. We are very grateful to Mrs Jeitta Kanneh for her tireless work in organising the project with support from Francis Mason. Thanks to Zoom, Isabel and David are able to meet with Jeitta and others frequently to discuss progress. It has been found that tomatoes will continue to flourish through the dry season up to Christmas, and cassava all the way through the dry season. REC Hastings has built a greenhouse. Others have organised irrigation. Kossoh Town School is growing rice, and Edest School is raising pigs! On the negative side, some schools have lost crops through vandalism or theft. We may need to help with financing fencing. However, all in all, the results have been spectacular. The community is taking ownership, so that these are becoming ‘community farms’, not just school farms.

David observed that it makes sense for us to support the women gardeners of HAGA- some 400 strong now.  Their work could well lead to the setting up of a cooperative and, with some external funding, some sustainable businesses.

Derek commented that when he first saw Hastings SL some 20 years ago, he hoped that our combined efforts would one day lead to such change.

Richard showed some pictures of the developments at the Health Centre – building the triage & isolation units. In fact, the roof is already on. 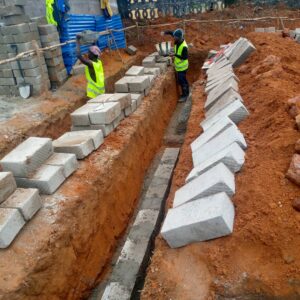 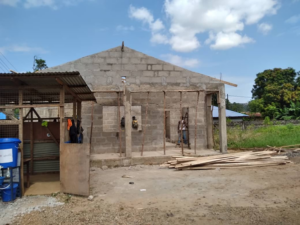 The On-line Auction. Roger is again masterminding an on-line auction – last year’s was very successful. Everyone is asked to email Roger (avvk28@dsl.pipex.com) with offers of an item for auction, together with a photo if possible and an idea of its value. If you have a contact with a retail shop or in the business world, perhaps you could get them to provide an item or a voucher for a service. Offers should be in by November 5th. Robin will complete the on-line catalogue, and the auction will go ‘live’ on November 13th and close to bidding on November 24th.

(b) Events.  We cannot tell when we can resume our usual fundraising events like the Big Quiz, a wine-tasting or a music quiz, so it is all the more important to support the on-line auction. and the orange quiz sheet when it comes out (by mid-November).